If you are in the market for a new microwave oven there are several options from which to choose. You could buy a conventional microwave or splurge on a convection microwave oven.

They can also cook freezer meals, boil water for tea or coffee, or melt butter for baking.

… however, a convection microwave can do more

A convection microwave is a combination of a microwave oven and a convection oven. Having the option of a “second oven”, you instantly have more cooking possibilities—from baking and cooking to crisping, grilling, and roasting.

This makes it an attractive purchase whether you have a large kitchen, fitting out your RV, or are living or working in a small space.

A microwave only has one heat component to cook foods – a magnetron. This generates microwaves from electricity inside the microwave oven.

Microwaves are one type of wave on the electromagnetic spectrum. These waves are absorbed by water, fats, and sugars (not by glass or ceramic) and go through the food and excite water and fat molecules.

The molecules rotate and as they are doing so, bump into each other. The motion of the particles creates heat. Although this thermal energy heats food some parts of the food get hot and others don’t.

In contrast, a convection oven uses standard microwave technology, an additional heating element, and a built-in fan to circulate hot air around the food. The fan circulates the air constantly which helps keep the temperature consistent while heating and cooking foods. This results in efficient and equal heat distribution.

Microwave ovens cook outside in by heat conduction. However, they don’t always cook food evenly and tend to suck all the moisture out of some foods, such as bread.

Convection microwave ovens heat the same way – outside in. They also perform the same function but with more even heat distribution due to its interior fan.

Food can cook thoroughly and quicker at a lower temperature and flavors are enhanced using a convection microwave. Because of the way foods are cooked in a standard microwave, food is steamed and loses some of its flavors.

A convection microwave oven lends itself to baking, crisping, roasting, and browning while microwave ovens do not. You can bake almost anything from tasty treats like cookies to healthy homemade bread. Some models allow baking up to 425°F.

Pizza from scratch can also be prepared. For best results,  preheat the pizza stone and sauté chicken, ground beef, or sausage to an internal temperature of 160°F.

If you’re fortunate to also have an oven for cooking larger portions of food, a microwave convection oven offers additional space for simultaneous cooking. It is also great for preparing smaller portions of side dishes when hosting large dinner parties.

Some models include multiple oven racks or shelf positions which enable you to cook more than one dish at once.

Convection microwave ovens can be pre-heated; while conventional microwaves lack this feature. 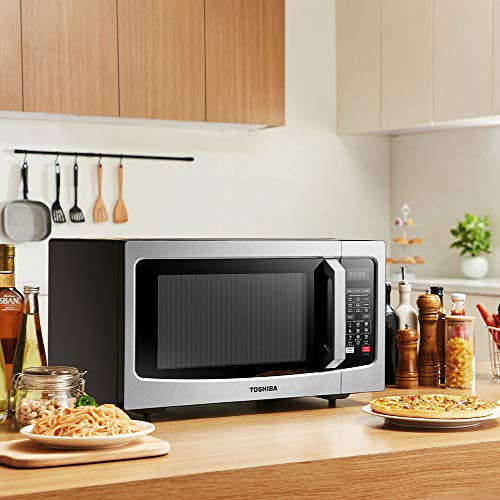 As with all appliances, the features of convection microwave ovens vary with the model. We provided this list so you could decide which ones are “must-haves” and which ones belong on a wish list.

Automatic/auto programmed functions: Key in the type and weight of food, and the cooking time is automatically calculated. A ‘time adjust’ function allows you to quicken or slow down the programmed cooking time without interrupting the cooking.

Basic controls: Simple display controls help you know exactly what they do.

Convection rack: Rack is designed to allow the air to circulate around foods for even heat distribution.

Interior light: Keep an eye on your food throughout the cooking process.

Multi-stage cooking: Select a series of cooking functions, such as defrost, cook, and grill.

Suitable size: Your cooking dishes need to fit inside comfortably.

Timer: Handy if you don’t have a traditional oven. It can be used for stovetop cooking too.

Recessed turntable: Maximizes oven space and can accommodate more than one dish.

Smartphone control: The bonus feature of some convection microwave ovens is that they can be controlled by your smartphone.

Steam Cleaning: Fill the container that comes with the microwave with water, place it in the suggested place in the unit, and press the appropriate button. Then wipe the walls of the oven.

Child safety lock: Some models are locked and unlocked by pressing two buttons at once and holding them for three seconds.

Disadvantages of a Convection Microwave Oven

Convection Microwave ovens are great when …

We have compiled what we think are the top convection microwave ovens along with a buyer's guide.

Conventional microwave and convection microwave ovens have different purposes. The former is mainly used to reheat food, defrost, and cook frozen dinners. As we’ve already said, the latter can be used for baking, browning, crisping, grilling, and roasting.

What size of bakeware should be used?

Choose bakeware that isn’t too deep or tall so hot air can circulate all around the food.

How do I know what temperature to use?

Check the user manual for suggested cooking times and temperatures.

Can metal and aluminum foil can be used?

Before buying, check the user manual online of the model you want to purchase.

On their website, General Electric Appliances says “Microwave convection ovens can use metal and foil safely during the convection cooking.”

Should convection ovens be preheated before cooking your food?

Yes, your food will be evenly cooked.